In 1923 a brown stud colt with a white streak down his face was born. From the moment his four hooves hit the ground, people knew he was different. Many had positive reactions, but then again a lot of people weren't too sure about this unique horse. His sire was a Quarter Horse named John Wilkins, which was a nice stallion. The Dam is where things get interesting. This foal was out of a mare named Brown Hancock Mare. She was half Percheron. During this time, the topic of what a Quarter Horse actually was, was just making a debut, so it was a very new subject to horse people. One thing was for sure, A Quarter Horse was not a Percheron.

The breeder of this foal was named John Jackson Hancock. They lived in the Texas Panhandle area. The rancher kept a band of about 40 broodmares on his ranch. It was said that he would sometimes breed a handful of the mares to a small Percheron stallion. This brown stud colt had caused a lot of controversy within the equine industry. Some swore by this stallion's potential, but others cringed at his bloodlines. Regardless, Mr. Hancock had brought the colt into this world and he decided to take him to his son, Joe. The horse was transported, in an old style wagon trailer, to Nocona Texas. Joe Hancock had a small herd of ranch horses, so when his father brought him this brown colt, he really had no purpose for him. He agreed to keep him, but he was going to geld him. Jim Kingensmith was the vet who came out to castrate the horse. They went ahead and hobbled him in preparation for the castration. However, Jim hesitated. He took a good look at the colt and said to Joe, "I've cut a lot of horses and I am fixing to do another one, but damn this is a helluva horse, Joe." Joe took a step back and he too looked at the brown colt. He thought for a second and said, "Let's take the hobbles off." This decision was the start to a legend they never saw coming

As the colt got older, Joe started using the Hancock horse on the ranch. He had a stout conformation, a calm, yet tough disposition, and a natural cow sense. The stud was beautiful and tapped out at 15.3 hands. He worked cattle on him and realized he even had some speed. To try his luck, Joe sent the stud to a man named Bird Ogles in Oklahoma. Ogles was in with the racing organization and they decided to see how he did on the race track. Ogles took the stud to a local fair to enter him in his first race. When the racing secretary asked for the horse's name, Ogles paused. He then said, "He doesn't have one, but he's owned by a man named Joe Hancock. So just call him that."

Joe Hancock raced in matches races for a few years. Some people had started labeling him a "genetic freak" with being half percheron, but he excelled at everything they through at him. After he raced, the stallion was sold to Bird Ogles son for $1,000. This was a substantial amount during the Great Depression. His new owner then turned around and sold him to Tom Burnett with The Burnett/Triangle Ranch. Tom purchased the stud for $2,000. Joe Hancock began his career as a senior stallion for The Burnett Ranches. He only sired 157 foals, but his bloodline continues still today. The number has exceeded that by many sires in the age of scientific breeding advancements. He had an amazing work ethic that he demonstrated on the ranch and definitely passed onto his offspring.

As for Joe Hancock's racing days, no official records can be found. People have been able to find certain magazines/articles that talk about Joe Hancock racing, but nothing beyond that can be found. Even though Joe's racing took place before the formation of AQHA (American Quarter Horse Association), he is the first Quarter Horse credited for running the quarter mile in 22 seconds. He was also inducted into the AQHA Horse Hall of Fame in 1992. Despite all the controversy in the beginning, he made his mark in this world. The Hancock bloodline will never die or be forgotten.

Joe Hancock passed away in 1943 at age 20. He took the equine world by storm and left his hoofprints everywhere. Over 70 years later, Hancock horses are still a main discussion between horsemen and women all around the world. They are a popular horse for ranchers, cowboys, rodeo contestants, trail riders, and many other people. They have a distinct personality, but hearts of gold. They do have a reputation to have a bucking problem, but I truly believe it depends on each individual horse. They are their own horse just like we are our own person. Horses who don't have a bucking trait, can still be broncs. My childhood mare was a Hancock horse and she was the best horse I will ever own. Some people love them and some people dislike them. The thing I think we can all agree on is they have led an amazing legacy and will forever be apart of horse history. 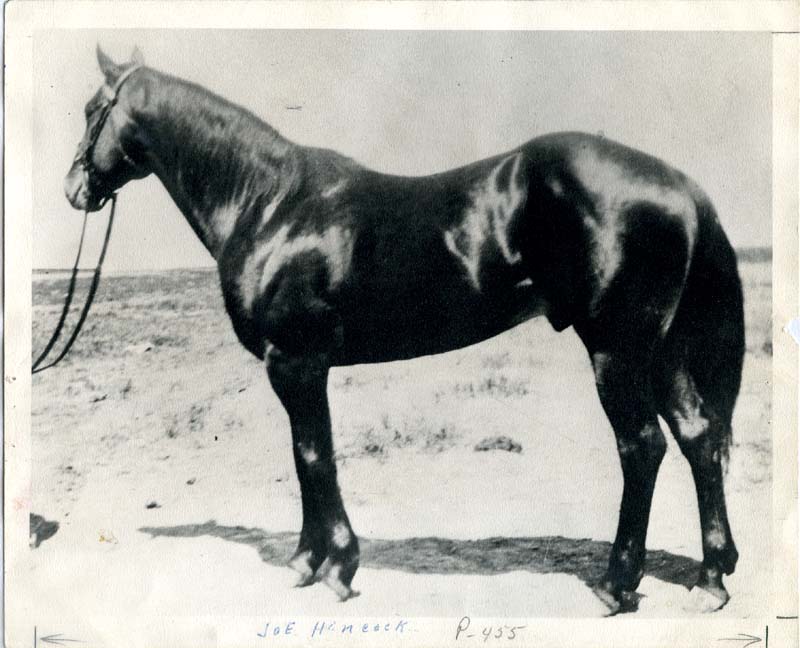