Bully Bullion was a phenomenal bay stallion, born in 1984. He was bred and raised by Jean and Andy Chavers. The Chavers were located in Fort Lupton, Colorado. It is really cool to find out that such an amazing horse was born right in our backyard. Bully Bullion was a successful racehorse and produced outstanding offspring. He was also the first crop of foals sired by Special Effort, a 1981 World Champion. Mary poppins, a 1963 Quarter Horse, was his mother. He was the only horse to ever win the two year old Triple Crown and he made a huge name for himself nationwide.

Bully Bullion started his life with an excellent racing career. Jean Chavers raced this extraordinary stallion for most of his life. He earned $225,384 with stakes wins in 1987 as a three year old at Sunland Park and La Mesa Park. Bully also won stakes as a four year old at Ruidoso Downs. This horse had such a presence and he meant business wherever they took him. He was fast with a speed index of 104, but had an excellent mind to him. In 1988, Bully Bullion won in the All American Gold Cup and Mr Jet Moore stakes. This crowned him the 1988 American Quarter Horse Association Champion Aged Stud. During his racing career, Bully had 10 wins, 8 seconds, and 4 thirds. Only four times he fell under 3rd place.

Bully Bullion ended up with a couple in Oklahoma and he stood there as a stud there for the duration of his life. Dee and Betty Raper, out of Oklahoma, owned Belle Mere Farms and Bully sired many foals on their property. He sired foals that earned close to 9 million in American Quarter Horse Association Races. The Raper's found he excelled in every performance discipline. He made a tremendous mark in the barrel horse world and is an ideal bloodline for many barrel racers today. With is earnings in barrel racing, Paint Horse, and Appaloosa racing, his earnings easily hits 10 million. He is also the Number 2 All Time Siring Son of Special Effort.

The bay stud produced many money earners and record holders. He was a sire with a good mind and lots of try. The Raper's loved this horse so dearly. He was more family than a horse. The couple had said, "Bully had one of the most unique personalities they ever saw; he was almost human and he passed it on to many of his foals." It has also been said that fans would send letters to Bully Bullion. He touched many hearts all around the world. As was said before, he excelled in any discipline they put him in and his offspring stands true to that as well. His daughters have already produced 71 stakes winners and have earned more than $12.1 million. Back in 2010, his stud was $2500. I can't even imagine what it would be today. His foals are still very sought after and unfortunately, can be tricky to find.

Sadly, in 2014 Bully Bullion was laid to rest. He was 30 years old and had an amazing life. He was surrounded by people who cherished him and he left behind an unforgettable legacy. Bully was buried at Belle Mere Farms in Oklahoma alongside other great horses that the Raper's had owned. He was an outstanding horse and his influence will forever be felt in the American Quarter Horse Association Horse Racing. It is truly amazing how a horse can touch so many lives. I included a quote from the Raper's when they laid Bully to rest. It is so touching and makes you very thankful your four legged family members. He will always be admired and have a huge impact on the horse industry.

"It is great sadness that I share the passing of our beloved Bully Bullion... at 30 years of age complications from old age had started to affect our Champion and believe me it took sometime for us to make the decision but the time came and we could no longer think that sometime Bully would suffer, that was not going to happen not to Our Bully..... He was loved and admired by so many in the Horse Industry.. and will be greatly missed.... Bully Bullion 1984-2014" 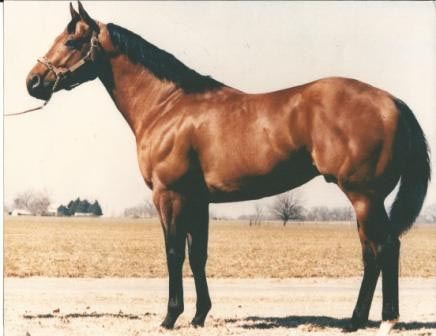