Blue Valentine is a legendary stallion who was the perfect blend of arena horse and working horse. He was a beautiful blue roan stallion, born in 1956. He was sired by another legendary horse, Red Man, and his mother was a mare by the name of Beauty's Dream. Red Man was a top ranch horse and a son of Joe Hancock. Blue Valentine was foaled in Benson, Arizona on Kenny Gunter's Ranch. Dell Haverty bought the sharp looking stallion and this was the beginning of a great family affair.

Haverty's wife was a daughter of Buster Hayes from Wyoming. Both families owned ranches and had a pretty successful horse operation going. Haverty sold 1/2 interest of Blue Valentine to the Hayes Brothers Ranch. The Merritt family was also involved with the deal. Hyde Merritt, who was Buster Haye's Son In Law, was also a co-owner of Blue Valentine. Little did they know, this new stallion would becoming a legendary horse. This horse had loads of potential and the whole family quickly fell in love with him. They named him Blue for short. The Hayes/Haverty/Merritt partnership began with them hauling Blue down south to compete at Fall/Winter rodeos and to partake in the early breeding season in Arizona. They then hauled him back to the Hayes Ranch in Wyoming for late breeding season and to rope at the Cheyenne Frontier Days Rodeo. It was said that Blue was the nicest horse there that year. They also hauled him to other Wyoming rodeos and roped off of him.

Blue was used for roping, ranch work, and steer tripping. He excelled at everything they put him in, but he was the best at roping. In 1968, Haverty's daughter ran barrels on him for the first time. He had never even seen a barrel before and still placed 3rd at the Annual Casper Wyoming Pro Rodeo, an all girl competition. Over the years, the whole Haverty, Hayes, and Merritt family took turns competing on Blue in rodeos. He had speed, good bones, a gentle disposition, longevity, and cow sense. No matter the task, Blue would get it done. He was very versatile and was used in all sorts of disciplines like ranch work, ranch rodeos, trail riding, pleasure/show, barrel racing, and speed events. King Merritt and Hyde Merritt ended up purchase Blue Valentine completely and everyone continued to compete on him. Each family loved him and had such an amazing bond with this stallion.

Sadly, in 1980, Blue Valentine passed away due to colic complications. He was 24 years old and died on Hyde Merritt's Ranch. All 3 families were devastated. When Blue passed, all of the families had some major hardships come their way. In the same month, Buster Hayes was in an accident and sadly passed away as well. Financially, the family could not take on the expense of the ranch. It was sold and the herd was dispersed. In 1983, only 3 years later, Hyde Merritt was also killed in an accident. His family had to sell his ranch too and most of his horses that he spent his life time acquiring. Thankfully, Hyde's wife and son were able to keep a few mares and two stallions. Their son, Chip, spent many years rebuilding the Blue Valentine legacy and kept the bloodline alive. Today there are only 2 sons remaining of Blue Valentine. Their names are Leo Hancock Hayes and Blues King Fisher.

Blue Valentine possessed strong genes and passed his amazing traits onto 210 AQHA foals. He is one of the greatest foundation ranch and performance sires to this day. AQHA does plan to induct Blue Valentine into the Hall of Fame as recognition to this is remarkable horse. There are 4 breeding operations in Colorado and Wyoming that carry on this sought after bloodline.

Blue Valentine was and will always be a legendary horse who left his hoof prints in many people's hearts. He sired amazing offspring and his lines live on today. In fact, Billy Ward, a 7 time National Finals Rodeo Pickup man rides Blue Valentine horses. No matter if you are roping, running barrels, or trail riding these horses will give you their all. It is so amazing to see the bond between a horse and a person. This horse touched the lives of 3 different families and in return, they have kept his legacy alive. Check out these awesome ranches if you are in the market for a new horse! They are owned by amazing people and the horses are immaculate. 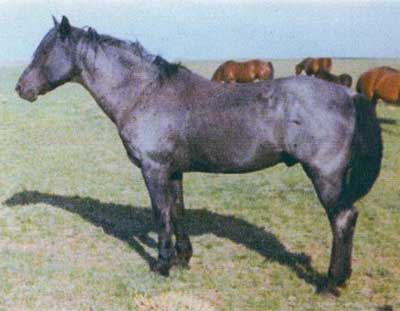